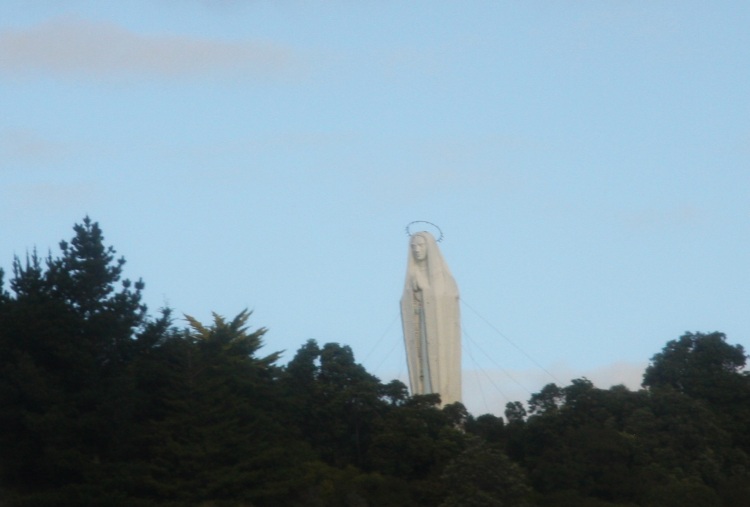 What could Paraparaumu possible have to link it to France?  The answer happens to be the large statue on the hill overlooking Paraparaumu of the Lady of Lourdes.  We have been talking about Lourdes at home recently.  A close friend of mine is going to be in Italy in September, and I was planning to meet up with her there.  We were hoping to stay with my parents-in-law in Cilento, Italy.  The idea was that we would both practise our Italian, and enjoy swimming in the beach down the road.  However I just found out that my parents-in-law have already booked a September holiday to Lourdes!

Between 11 February and 16 July 1858, a 14 year old peasant girl in Lourdes had visions of Virgin Mary on 18 different occasions.  Her name was Bernadette Soubirous and at the time she was in a grotto near her hometown in Southern France.  In her visions she saw a young woman holding a string of rosary beads and wearing a golden rose on each foot, she also wore a white veil and a blue girdle.  On 25 March 1858 when Soubirous had her 17th vision, she then identified the mystery woman to be the Immaculate Conception.

A century later in 1958 a Paraparaumu Priest, Fr Jack Dunn decided to commemorate the centenary of this vision by commissioning a statue of Virgin Mary.  The statue was known as ‘The Lady of Lourdes’.  It is 12.5 metres tall and located on land behind the Presentation Sisters convent on the hill above the northern end of Paraparaumu.  To get there you can drive to Tongariro Street, and then walk up a short pedestrian track to the top of the hill.  The statue is surrounded by trees, but immediately to the front of the statue you will find panoramic views of Kapiti Island, so be sure to take your camera with you.

Martin Roestenberg managed the project.  Roestenberg emigrated to New Zealand in 1951 with his family from Holland and lived in a small town called Taihape.  He created the head of the statue (two metres high) from his home in Taihape, but made the body and shoulders (four metres wide) on location in Paraparaumu.  At night, you can still see the statue because it is lit up by 17 light bulbs.  The inside of the statue is hollow and contains an internal staircase.  The project was no easy task.  It involved heavy building work, including leveling the mound that the statue sits on, and building the scaffolding.  There was no road at that time so everything, including concrete, had to be taken up the hill by hand with help of the local community.  The project took six months to build.  The winds of 156 kmh during those winter months did not make it an easy feat.

The statute was blessed in October 1958 by Archbishop Peter McKeefry.  Aucklander’s totalling 1000 people travelled by train to witness the occasion.  In total there were 6000 people present for the blessing.  To celebrate the opening a special hymn was composed by a Catholic music teacher, Dorothy Curran, called ‘Our Lady of Lourdes’.

In 1983 the Catholic Legion of Mary organisation celebrated their 50th Anniversary.  To mark this auspicious occasion, they held a ceremony of Benediction at the statue in Paraparaumu.  The ceremony lasted throughout the night, with people kneeling in prayer.  There were too many people to fit around the statue, loud speakers were set up so people in the town below could join in.  In total approximately 5,000 people attended that event.