If you saw my earlier post on Le Patio you will have learnt that was my number one favourite place to go in Prague.  However there were many other great little cafes and restaurants there.  Too many to mention there.  However, I must n ot forget to mention Cafe Louvre.  Cafe Louvre was another cafe that left an impression on me.  It was called Café Louvre and was very upmarket.  I was a little worried I was going to charged the sorts of prices you get at the Ritz.  To my delight they were not too bad.  One of the things that stood out for me was the history of the place, as it was a venue to which no other than Albert Einstein had been.  How incredible to think you are standing somewhere that he himself used to visit.  The cafe also played host from 1925 to a group called the Pen Club. 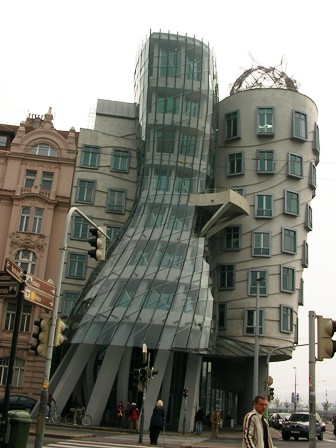 This building is called the dancer, and you can see the ‘legs’ are entwined in the dance.  It is usually referred to as the ‘Dancing  House’.  The building was created by architects, Frank Gehry and Vlado Milunic.  Gehry is Canadian, and Milunic is Croatian.

This video below gives you a tour from inside the Dancing House, and is well narrated.

This is the Obecni Dum (Municipal House).  It is situated in Republic Square in Prague.   Its claim to fame comes from playing host to the proclamation of the independent state of Czechoslovakia on 28 October 1918.  The building was built in 1911 on the grounds of the former Royal Court Palace.  Today it houses a French restaurant and one of the city’s best concert halls.  Being the home town of Dvorak and other musicians, Prague is an ideal place to experience live music.

The image to the left is a statue on the Charles Bridge.  The bridge itself was founded in 1357 by Charles IV although it was not completed until 1402.   The bridge is lined with thirty (groups of) sculptures of Saints.  The bridge extends to 515 metres in length.  In addition to Saints, you will also find swarms of tourists, together with buskers and artists offering portraiture services.

Above is the Franz Kafka Statue.

As explained in the sign pictured above, the photo below is a memorial to those who were victims and political prisoners of Communism.  Prague also hosts a museum dedicated to the Memories of Communism. 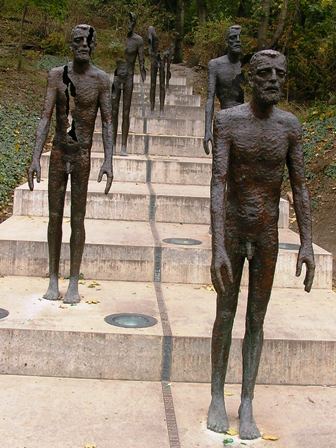 These photos were taken in October 2006.