Today I cooked a ham and mushroom, onion and red pepper pasta dish.  I was starving and this dish really filled me up.  I had ham and mushrooms that needed eatings so I thought the alternatives were a toasted sandwich or pasta.  Given I am trying to keep away from too much bread, I thought that pasta would be a good alternative.  I was looking for those long strips of tagliatelle or fettucine, I get mixed up with the names.  Then I came across the bag of pasta  that Louise had bought me from Milan.  It is a shame I hadn’t got around to cooking it when Louise was here so we could enjoy it together. 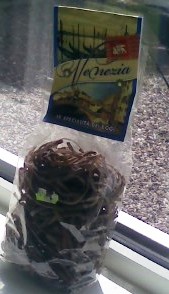 I started first by cooking the ham first, with butter (in preparation for the white sauce).  Then I added in chopped onions, the mushrooms, and lastly the red peppers.

I let this cook a while on simmer, and then later added the flour and milk (lactose free) that I had mixed together in a separate bowl.

Now that the sauce was done, I boiled some water, and added the hot water into a large saucepan.  I then sprinked a generous amount of salt into the water and added a drop of olive oil to the water. 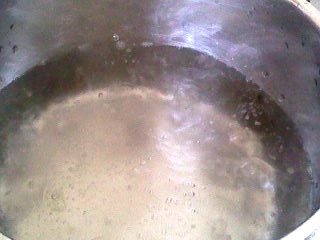 I then opened the packet of pasta and threw it into the boiling water, stirring it once or twice to ensure it was completely covered by water.

After five minutes I checked on the pasta, and then left it to cook for about another five to ten minutes before taking it out. I used a collander to drain the water, and then placed all of the pasta over the sauce.  I then mixed the hot pasta into the sauce to create the finished dish. 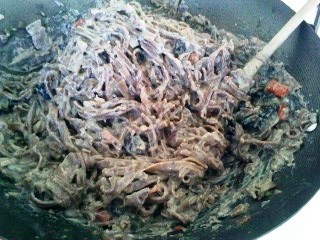 Bon Appetito!  There is plenty left over, so we’ll probably end up freezing the rest of it for another day.