Well, if you are male, I expect you may have never been to a baby shower.  The etiquette on baby showers says that it should be a time for female bonding.  An opportunity to ooh and ahh over baby toys and little baby clothes.  Baby showers became a trend after the second world war, in the late 1940’s and 1950’s.  Baby showers continue to this day.  Some baby showers have evolved to become co-ed experiences as baby’s mum’s want to invite close male friends.  Sometimes the proud father to be also wants to join in with the fun.  Much of this will depend of course on the individual personalities involved. 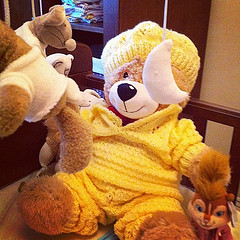 I went to a baby shower just last weekend.  It was fabulous fun.  I haven’t been to many baby showers.  Only two before that one.  The last baby shower I went to was almost a decade ago.  It’s rather funny how there has been a big gap.  I don’t quite understand it.  Whether  my friends who already have babies had their baby showers when I was out of town and therefore I did not know about it.  Perhaps the baby shower took place but I simply wasn’t invited.  Or maybe they decided not to have a baby shower.  One of the other ladies at the baby shower told me that she had never been to a baby shower until this year, 2012.  I found that quite incredible.  But then again, I hadn’t been to one recently (not for 10 years!).  So perhaps people have been so very busy with work and then having the baby, that they do not always have time to organise a baby shower.

I must admit I’m not at all knowledgeable on baby things.  All I know is that the toddlers go through teething.  I also learnt that amber necklaces are soothing and popular for babies to wear.  The resin is warm to the touch and against the body, it will naturally warm.  It allegedly gives off a property that helps relieve the pain of teething, asthma, and eczema.

When it comes to baby showers and answering quizzes on babies I always get very very nervous.  Fortunately for me, my friend Fei was with me.  We were told to get into pairs for the quiz.  I quickly said I would partner with Fei.  Oh, that was a relief!  Fei used to be a nurse and she is also a registered early childhood teacher, and she is very knowledgeable on all things babies and toddlers.  Contrary to my fears, the quiz was great fun.  I even knew the answer to one of the questions! The question was what colour did the parents dress the boys in during Victorian times.  I knew the answer to that, because I had seen them discussing this very topic on the QI television show on Dave!  Came in handy watching that on TV!

If you are thinking of holding your own baby shower or are looking for ideas on what you can make yourself at home, you may find this video below of interest.  It is by a lady in America who shares with us what she handmade for her daughter’s baby shower.

Although I had been dreading going to the baby shower.  Yes, I really was, deep down inside.  I did in fact, have the most brilliant time at the baby shower!  There was plenty of food and drink when we arrived.  There was a small enough group that we were able to mingle and get to know each other.  The other ladies there were friendly.  There were not too many games, just the right number.  And the games were in fact a good laugh!  The decorations were adorable.  Decorations of baby things around the lounge.  There were even baby shower cups and baby shower plates and baby shower napkins.  I was quite overwhelmed.  There had been a lot of thought into planning and organising this event.  Emma even made some baby shower muffins.  More precisely, they were cupcakes.  I normally don’t eat icing, but I couldn’t resist this icing.  With one taste of it, I was sold!  The cupcakes were decorated with little baby tops and baby feet, utterly adorable.

Baby showers are supposedly held during the third trimester.  I’m not entirely sure what this means.  But my friend is now 33/34 weeks, and so the baby is due within the next couple of months.  I am looking forward to seeing her.  We have already seen the little baby on the tv screen from the recording the doctors made during the scan.  We could see her little nose and her little hand.  Absolutely amazing.