Since moving to Wellington in 1996, I was fascinated by the restaurant near the end of Taranaki street called Fujiyama.  It was their sign, a large bright blue painting of a mountain that caught my attention.  Its location makes it very accessible to people because it is within easy walking distance of both the Central Business District (CBD) and Courtney Place (the night life capital of New Zealand).  Rumour has it that the same people who own this restaurant also own another Fujiyama restaurant 13.8 km away in Lower Hutt.  I had the opportunity to sample the delights of the Lower Hutt Fujiyama a few years ago at a family friend’s 50th Birthday party.  I was there with my parents, and we all had fabulous fun.  This experience came back to me recently during a recent visit to Wellington when I tried to think of a place to meet up with friends.  Our catch up was to be the day before Anzac day, Friday 24 April 2009, and the town was a little quieter than usual.

It is reported that Misono was the first restaurant to offer teppanyaki, that is a restaurant chain in Japan that opened in 1945 to cook Western-influenced food.  It was Misono that reportedly invented the onion volcano, whereby the chefs stack circles of onion and light them on fire to produce a show spectacular! Teppanyaki uses an iron griddle to cook food.  For those of you who dine at the Mongolian barbeque, you will already be familiar with the sort of iron griddle that is used for teppanyaki.  The Mongolian barbeque is similar to what we know as a stir fry.  It originated not in Mongolia but in Taiwan from the teppanyaki style that was popular at the time.

The hot plate is located in the centre of the diner’s table so that all the ingredients for the meal are cooked in front of diners.  In America restaurants and tourist specific restaurants in Japan, the style is similar to a steak house or stir fry, with chefs cooking beef and chicken and seafood.  However, the Japanese people instead prefer to have what is known as okonomiyaki, especially popular in Osaka.  I have never forgotten the okonomiyaki that I ate in a restaurant in Osaka during my school trip to Japan.  It was light and airy and extremely tasty.  I can remember that the ingredients consisted of flour, cabbage and squid.  At the time I was told that okonomiyaki is the Japanese version of a pizza. 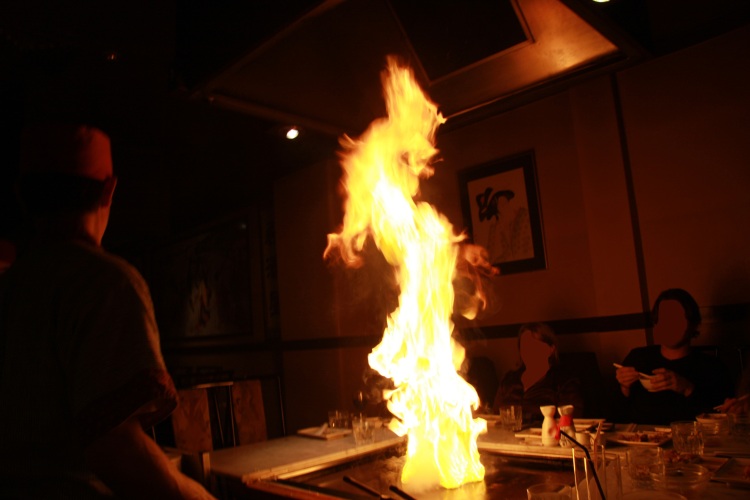 The entertainment at Fujiyama was second to none.  At 17 people, our party was large enough to require two cooking grills and two chefs.  The chefs were friendly, young and eager to please.  They joined right in with our party’s festivities with ease and great humour.  They were also happy to answer questions from our group.  To begin the proceedings, the chef’s invited each of us to catch an egg with our small rice bowl.  I wasn’t sure if I was brave enough to try.  The guy sitting next to me just missed, and his egg ended up half inside his bowl and the other half dripping over the bowl, and down his trouser legs!  That made my decision for me, and I shook my head to the waiter, there was no way on earth that I was prepared to get wet egg all down my dress, or egg on my face as the case might be.  The next task was to use your bowl to catch another bowl that contained fried rice.  Again, I passed on this task.  However, the majority of our table did participate, and I think everyone was successful in that task.  There were suddenly gasps from my friends sitting against the wall, and I looked over to see the clouds of red fire dancing in front of them.  Fortunately my camera was already out and I managed to get a photo of that which you see above. 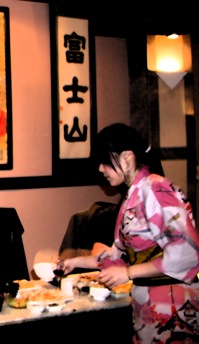 The waitress who seated us and served us with drinks and otherwise looked after our needs was much talked about afterwards, in a good way.   She wore a beautiful floral kimono.  My husband and others remarked to me how impressed they were with the immensely patient the waitress was with our group.  There were two reasons for this comment.  The first is that although our table was booked for 7pm, our final guest did not arrive until after 8pm.  The waitress suggested our table order set meals.  The process of deciding on the menu took more than a few minutes to arrange too.  The only grizzle I have is that it became difficult to get the attention of the waitress later in the evening to order drinks.  We did not get any refills to our glass of water we were presented with on arrival, and there were no jugs of water on our table.  Preoccupied with catching up with everyone and talking too much, I was not aware at the time of how dehydrated I was.

Most of our group ordered the fish and chicken set menu.  A few ordered the beef and chicken, and a couple of people ordered the vegetarian option.  This set meal consisted of two courses with a bowl of fried rice.  The fish was soft and tender and the chicken was tender too.  The egg rice was delicious too.  The food was overall very filling.  I know green tea ice cream is not to everyone’s taste, but it is one of my all time favourites, and I was not disappointed.  The green tea ice cream was refreshing and scrumptious.

There is no outside eating area, so if you smoke, then you will find yourself standing outside on the footpath.  This means you could find yourself getting a few strange looks from passersby.  Fujiyama is located in an unusual position in the city, as it is next to both a strip joint and a mechanics.  It is also located on an unusually wide road, across from which is a large furniture store and a petrol station.

The toilets at the back of the restaurant are found by walking down a dingy concrete corridor, which makes you think you are a million miles away in an deserted and abandoned works factory.  On arriving to the ladies toilet you discover that there is only one toilet.  So queuing can become an issue towards the end of the evening.  The washroom facilities consisted of a small basin inside the toilet cubicle.  The whole affair was very cramped and made you want to run out of there as soon as humanly possible.

The decor inside the restaurant is obviously not new, but it was simple and  somehow striking.  The walls are adorned with Japanese calligraphy and Japanese paintings.  They had successfully created an atmosphere where you could forget you were in New Zealand and almost think you were in Japan yourself.  The chefs too wore Japanese attire.  The only thing that I could say may be missing would be some background music.  However with all the loud chatter going on, it is possible I may have missed any music that was playing.  The restaurant was completely filled by 8pm that night.  There were four or five large parties in the restaurant, each with long tables filled with people.  Thankfully we all seemed to have arrived at different times, so that the chefs were not required in five places at once!

In these times of recession, I recommend you save yourself some money and purchase a Wellington entertainment book.  The entertainment book is available for other cities within New Zealand and Australia.  The book contains a gold card and coupons to give you two for one and other discounts at restaurants and some tourist attractions.  I have gone through a number of entertainment books myself, from one year to the next, and they have most definitely saved me a significant amount of money.  The price of these books varies depending on which city that you are buying the book.  For the Wellington 2009/2010 edition they charge $55.  Before you visit Fujiyama don’t forget to bring your Entertainment gold card with you, number 41 to get your discount of 25% as stipulated in page A59 of the Wellington entertainment book.  You can pick up a copy from your local charity who sells these books to raise finance.  If you live outside New Zealand you can purchase a book online at http://www.wellingtonspca.org.nz from the Wellington SPCA.  Don’t forget to get your entertainment book before you leave for New Zealand.

If you are celebrating with a group of friends and want somewhere interesting to go, with great food and reasonable prices, then head along to Fujiyama on Taranaki Street.  After dinner you can walk down to Courtenay Place to sample some local nightlife.